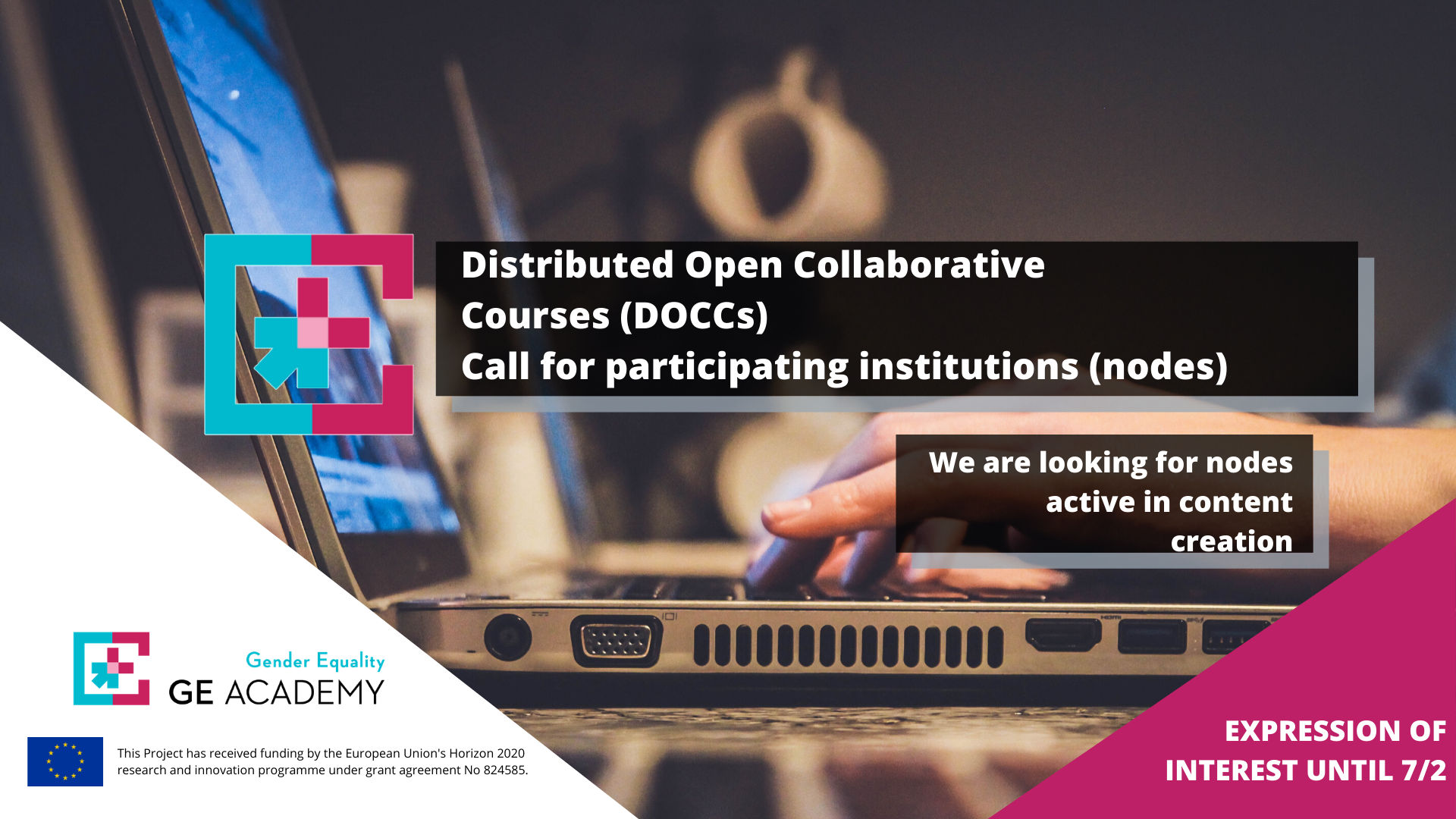 To further expand the reach-out potentials of the capacity-building formats and concepts which will be designed and rolled out, a digitally delivered learning programme is developed by the GE Academy inspired by the DOCC (Distributed Open Collaborative Course) model coming from the US based FemTech Network. The choice was made to opt for an alternative, connectivist version of MOOCs and achieve similar goals in terms of quantitative engagement with a less top-down oriented and more pluralistic approach. Indeed, the DOOC concept has been created by feminist scholars and practitioners to enact a less centralized and more interactive version of MOOCs: while the latter is delivered by one single organisation and a few instructors in the form of video courses and some offline assignments, a DOCC is a collaborative learning/training programme which can be jointly delivered by different institutions and where interactivity is enhanced.

The GE Academy DOCC will be hosted on an LMS (Learning Management System) with advanced modules and specific features for e-learning spaces, in order to keep track of learners’ access and use of the materials. The curriculum will roll out along approximately 8 weeks, with 3 hours attendance per week. Videos recorded during the different sessions will be uploaded on YouTube and embedded in the blog space, and training materials also made available online. Intermediate and final self-assessment tests will be proposed as well as a final test. A certificate of attendance will be made available to those who have completed 70% of the learning activities. Interaction among learners and trainers will be facilitated via a posting and forum functionality to be foreseen on the blog, and to be moderated by an online facilitator. Two iterations of highly interactive online learning programmes are foreseen: The first DOCC will be designed in conjunction with the first round of GE Academy Summer Schools to be held between June and  July 2020, and along with trainings, workshops and webinars, as an expanded learning space where different trainers/experts/participants can interact and exchange, on- and offline. The second DOCC iteration will be designed by the end of the GE Academy project and during the third Summer School in 2021. Contents of the course will combine different, content-wise complementary, class recordings and materials from GE Academy Summer Schools, Webinars and/or Training Sessions, together with ad hoc created exercises, materials, self-assessment tools and assignments.

The DOCC roll-out will be accompanied by an intensive social media campaign through other existing social media channels of the GE Academy. This will allow interaction to happen both via posts-comments on the LMS and outside for a wider outreach. The GE Academy DOCC for 2020, scheduled to run between June- July 2020,  will focus on Institutional Change for Gender Equality in Research approaching the topic and covering all the 3 ERA priorities on Gender in Research, namely: raising the number of female researchers, increasing the number of women in decision making in Research, supporting the inclusion of gender dimension in research content.

Call for collaboration for DOCCs nodes active in content creation

Consistently with the DOCCs concept, we want to explore and use a methodology where part of the online curriculum is co-created with different ‘nodes’ defined as external experts to the project consortium, so that knowledge is produced and shared by multiple sources and with different angles.

We are therefore selecting organisations and experts already active in similar fields as those we are exploring in the GE Academy project interested and willing to become GE Academy DOCCs nodes.

Who are we looking for?

What are we looking for?

We envisage that the DOCCs nodes would set up a working group (i.e. of graduate students or PhD researchers along with their teachers/supervisors in case the node is embedded in a University course) to collaboratively produce multimedia content (i.e. short video lectures, case studies analysis, web apps, infographics, etc.) on topics of joint interest, which could then become part of the online curriculum. Another option is to rely on existing already produced/content to be adapted to the format (on a case by case scenario).

We intend to finalize and upload all the materials on the platform by the third week of June 2020, therefore we envisage to go through the following tentative timeline:

What do we offer?

How to proceed and express your interest?